TV sets are getting better! But, exactly what makes them better? You’re in the market for a new flat panel TV and have decided that an Ultra High Definition (UHD, also known as 4K) set is the way to go, might as well get the best to protect against the inevitable obsolescence of technology. Do you know what to look for? After all, there are wide variety of price tags for what looks, at first glance, like pretty much the same size television. How come? The electronics industry LOVES catch phrases, and 4K is one of them! What it means is that a 4K set has horizontal resolution of approximately 4000 pixels, or colour dots on the screen, measured from right to left. (It’s actually 4096, but hey, who’s counting!). The now OLD system of High Definition only has 1920 lines. So, is this going to give you a dramatically better picture? Not necessarily. In order to actually see a difference you need to go big, like at least 60″ or more. Next, you need to have something that is capable of sending this TV the information it needs to actually show you this resolution. 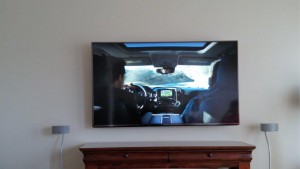 Streaming media companies like Facebook and YouTube were quick to jump on the new 4K wagon and cable television companies followed along quickly, offering set top boxes that can process 4K. There are still limitations to both of these delivery systems. For streaming media your internet connection has to be fast and robust enough to handle the huge increase in data that 4K requires. Set top boxes have the same issues. You can also buy a UHD Blu-ray player, this will give you the best quality, but all in all, these delivery services suffer from a current lack of content! It’s still early in the game folks, and 4K will soon become the defacto standard for television. So why do I buy a 4K set if I can’t see the difference on a 50″ screen size and there isn’t a whole lot to watch? Here’s the really cool thing about UHD TV – it has the ability to show you more colour and a greater contrast level (the difference between black and white also known as High Dynamic Range or HDR). Here’s where the different prices come into effect for the same size TV. In order to show you more colour and greater contrast on the screen more advanced technology is needed, both in the actual display itself and also in the on board processing power of the computer inside the set. The entry level price tag will give you 4K resolution but using the old LCD technology of yesteryear. As you go up in price there are differences in the way that the dots are illuminated and in actually how the dots are illuminated… I could write a couple of books on this subject! These more expensive sets are going to be able to show you the colour and contrast improvement, where the lower priced TV can’t. In my, and the rest of the expert’s in the industry’s opinion, HDR and wider colour gamut are the MAIN reasons to embrace the new UHD TV sets. Contact us today. We’ll make sure your new TV is ready for the future of television!