OK kids – There is a difference in HDMI cables!

This required conversation has to with Hollywood and the television industry not wanting the consumer to make perfect copies of their precious content. HDCP (High Definition Copy Protection) is what the industry came up with to try to prevent consumers from making copies of movies and television content in the new digital age. Ever since the beginning of home video recording devices the commercial governing bodies of the media production houses have tried to stop the copying of their content, even if the consumer has bought the content for their own use. In the early days of recording, VHS and Beta video tape recording devices used a system called Copy Guard, which was ridiculous in the sense that because it was analog video the resultant copy, if successful, looked like crap anyway – why try to protect it? But, we are now in the digital age, and making absolute identical copies is extremely easy – enter HDCP. This system requires 2 way communication between the source device and the end use device (usually a DVD or Blu-Ray player and a TV) and, any devices inserted between these 2 devices. If any one of the devices fails the test, no picture and no sound! The conversation is carried between the devices through the HDMI cables, which brings me to my point. As technology and digital  processing has increased exponentially the amount of information that needs to be transmitted through HDMI cables has increased exponentially, requiring different certifications for the HDMI cable all along the way. HDMI 1.0, Then HDMI 1.2, HDMI 1.4, HDMI 1.4a, HDMI 2.0. These new cables need to support the new Ultra High Definition picture, new High Dynamic Range, increased colour gamut and a bunch of additional audio information to support the new Dolby Atmos and DTS:X. It is because of the recording industries paranoia that we use HDMI cables in the first place when we have a perfect digital cables available in the form of fiber optics and the new display port interface, but these cables won’t support copy protection! 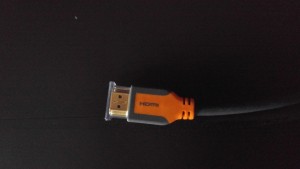 You see, HDMI allows the manufacturing industry (endorsed by Hollywood etc.) to encrypt the transmission of the signal. In order to make sure that the information is reasonably accurate after all of this encryption, two identical signals are sent and received with one the inverse of the other. If there is a difference between the two signals the on board error correction sets in. Any time you use digital error correction there is a chance that the algorithm will get something wrong, affecting the picture and/or sound quality of the content and if the communication can’t be made because of an HDMI cable that doesn’t meet the current standards of communication the whole chain shuts down leaving you with no picture, no sound, or both. So when it’s time to make the move to 4K make sure that your HDMI cables are ready to talk!

For a professional installation give us a call! You’ll be glad you did!