Posted on September 7, 2015 by Greg Beardall

This is a very nice installation in that the television is mounted on a reticulating arm so that the television AND the speaker system can be pulled out and pointed in the direction of the seating area. When the TV is pushed back into the recess it is perfectly centered in the cavity.

Wired 1 was called in to perform the installation. Usually I supply and spec the electronics used in the install but in this case the client had already purchased the equipment months previously, including a totally inappropriate mounting arm that was designed for the early days of large flat screen TV’s when they could weigh upwards of 80 pounds, and as such it was a massive unit that would have required that the TV stick out from the wall about 6″ (the client was able to return the dinosaur and we supplied a new slim line mount designed for their television). There also was no plans to mount the speaker on the bracket to allow for the sound to be aimed along with television. It was simply going to “sit” on the shelf below the television (We provided a soundbar mount for the new slimline bracket). Just sitting the speaker on the shelf presents 3 problems. #1 – The sound will be OK when the TV is in the recessed position but as soon as the TV is pulled out and aimed to a different area the audio will not sound like it is coming from the television. #2 – Because of the electronics sold to the consumer, the Playbar had to be connected to the television with a toslink  cable, also known as fibre optic cable. Toslink cables transmit the audio digitally as light pulses and are relatively delicate and in the original design this cable would have had to flex every time the television moved, causing an inevitable failure of the cable, and thus no sound! #3 – The client was told by the original dealer that the system could be built into a wireless SONOS surround system by adding a pair of SONOS wireless speakers for the back channels of audio (the client had already bought a SONOS wireless subwoofer to go with the system). 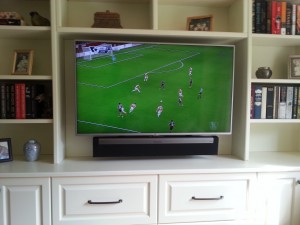 NOT the way that the system was designed and not without some evident problems with an annoying problem called lip sync. This is where the dialogue heard by the viewer does not match the on screen movement of the lips of the speaker on screen and it cannot be avoided with a SONOS Playbar, and this is why: The picture portion of the TV broadcast is being delivered digitally to the TV on a HDMI (High Definition Multimedia Interface) cable. Through this cable the picture and the sound are perfectly computer synchronized, and here’s the important part, and the audio is in digital Surround sound audio if it is being broadcast. As soon as you deliver sound via the toslink connection, because of the translation time of electrical signals to light pulses and back again and the inexpensive decoders in most cable boxes, the picture (via the HDMI cable) and the sound (via the toslink cable) are out of sync. Now this will happen if the cable box is connected DIRECTLY to the SONOS speaker, but in this case, because the client was told that they could watch AND hear the SMART features of their new television, the TV audio was connected directly to the back of the SONOS speaker with a toslink cable. So, to clarify, an HDMI cable comes from the cable box directly to the HDMI input on the television… good, then a toslink cable is connected from the back of the television to the SONOS Playbar… bad, and here’s why. The SONOS Playbar only has ONE way to connect an external device, and that is through a toslink port on the rear of the unit. Almost every TV (and I know of no exceptions) currently on the market DO NOT send the digital surround sound audio out of its toslink audio output. Due to copyright issues the electronics industry will only allow them to output stereo audio, not digital surround sound. The television industry has found a way to get around this restriction and it is called ARC or Audio Return Channel. This uses the same HDMI connection from the TV to send the digital surround sound to the audio system. Really neat! But SONOS does not have this on the Playbar. So, to sum up, SONOS is a really neat way to get streaming media throughout your home but for video sound go see an expert at Wired 1 Consulting! You’ll be glad you did.