You know you’re in the right line of work when you get comments like this!

Posted on September 6, 2014 by Greg Beardall

I recently installed a pair of SpeakerCraft outdoor speakers for a client after he bought a pair of “outdoor” speakers from a big box store and was very unimpressed with the sound and build quality. I had mentioned to him when I designed and installed his home theater system two years ago as to what he should have. I had run wires outdoors to his deck for future consideration and just happened to run into him in a store when he confessed that he had just bought a pair of speakers for his deck. I asked him what he got and I told him – you won’t be happy! A week later he called me! I ordered the equipment for him, SpeakerCraft outdoor speakers and a Marantz MM7025 stereo power amp. I installed the system for him and I got this text message last night. 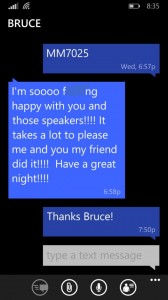 Kind of makes it all worth while!