A longstanding client of mine contacted me recently complaining about a few things. The remote control for their satellite receiver was starting to fail and the sound wasn’t always in-sync with the images on the screen (I call it the “Godzilla” effect, where the mouth moves and a split second later you hear the voice). The reason for this was easy to understand as they had bought a new digital flat panel TV and had used HDMI cables to get the best picture from their HD satellite receiver and Blu-ray disc player. In order to get the sound to come out of their surround sound audio system they also had to make separate audio connections. The problem with that is that even though they might both be digital audio connections,(HDMI and either coaxial or fiber optic digital audio) the onboard processor in the Blu-ray or the satellite receiver will prioritize the audio processing in favour of the HDMI output and as a result, the digital audio is very slightly delayed when compared to the audio that is transmitted through the HDMI cable. The replacement for the old Sony receiver with a new DENON receiver now gives them full HDMI switching (it has 7 HDMI inputs!) eliminating the need for digital audio connections. The DENON also has automatic lip sync that makes sure that the mouth moves at the same time as the voice comes out! With UHD (Ultra High Definition) compatibility they will be ready for their next TV when the time comes!

A Harmony Ultimate Home remote control system now gives them the freedom to control the system from anywhere in the home. No pointing required! And one rechargeable remote control hand unit instead of the 5 remotes cluttering the coffee table that they previously needed.

To find out what Wired 1 Consulting can do to simplify and improve YOUR valuable leisure time contact us today! 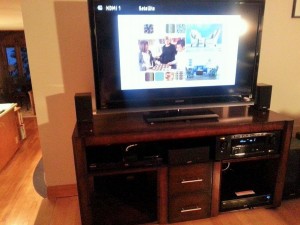