Yup, there is a BIG difference!

I was contacted a couple of weeks ago by a client. I had put together a great system for him “many moons” ago, but, he was moving into a new home and wondered what he should get for a new TV. He said that the gear I had sold him was still working great but he realized that technology had come a long way! We started with the TV. So, I ordered him a new 65″ Samsung Quantum Dot ultra high definition set. A day or two went by and he sent me a text message, with pictures, from the local Costco asking why the 65″ Samsung TV’s on display in the store were considerably less money than the one we ordered. I assured him that he would be able to see the difference that quality makes! The day arrived to mount the TV in his new dream home. He helped me uncrate the new TV and the first thing he said was “OMG,  look how thin it is, the sets at Costco were a LOT thicker!”. I installed the new set on the wall and connected it to his Wi-Fi network. I put on some 4K content for him from YouTube and his jaw dropped! He could not believe the quality of the image he was seeing! He called his wife, his father in law, and some of the furniture movers that were still on site to see the picture quality on his new TV! The project is still ongoing, but as I drove home from his house that afternoon I received a text message from him. “I F’n LOVE that TV!” 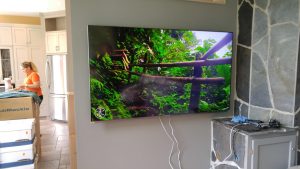 It’s comments like that that keep me doing what I love to do!!